My husband Mark met Trudi Forti at an open mic night at The Commons Café in Bend. 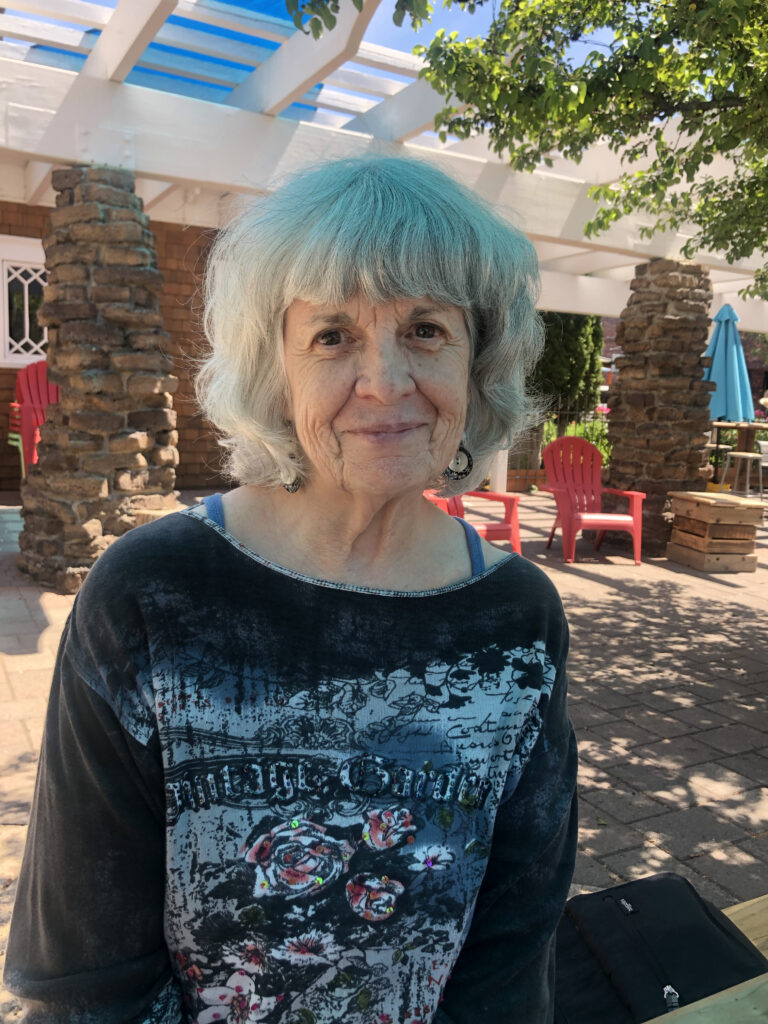 When he came home, he told me he got choked up listening to her poetry reading. As he described it, he was clearly moved and since Mark is not the easiest person to impress, I decided I wanted to hear and meet Trudi myself. And when I did, I became a fan too.

Trudi is a special person. She’s kind and creative with a quirky sense of humor. At age 75 she sees the world with light and hope, but she’s also not afraid of the darkness, especially when it comes to spoken word and songwriting. If you’re familiar with Mark’s songwriting, you know his dark side. And while some people ask him if he has more “upbeat” songs, Trudi gets him. In fact, she slips into his dream-inspired songs easily and willingly.

“When I first heard Mark’s voice and the song he sang at the open mic, it was like returning to the womb,” she said. “Sometimes, you disappear into something and become one with it.

Trudi, like many of us, sometimes struggles with anxiety and depression. Born with a vivid imagination, she grew up in rural Milwaukie, Oregon and describes her childhood as idyllic and wonderful. She and her childhood friend Colleen played elaborate pretend games in which Trudi was always Tarzan, Billy the Kid or a wild horse, running wild and free.  She organized neighborhood plays, parades and even a carnival.

“It was wonderful, my childhood, like something out of a book,” she said.

Trudi’s self-confidence took a dive when she entered high school in the ninth grade. Separated from her childhood friends, she ended up in an affluent, all-girl catholic high school across town and she began struggling with anxiety.

Because mind and body are so closely intertwined, Trudi’s anxiety compounded other health issues like allergies, chronic earaches and sore throats. She remembers her mom bringing her hot cocoa and sitting up with her at night to comfort her.

When Trudi finally got the courage to ask her mom about getting professional help, things became uncomfortable. She could tell her mom didn’t know how to react. Her family didn’t argue or raise their voices and she sensed shame when she brought up the idea of getting mental health support from a counselor.  Little by little she became more guarded.

In the years that followed, Trudi lived and worked in cities across the globe. She moved from Milwaukie, Oregon to Stockholm, Sweden to Spokane, WA to Rome, Italy, where she married an Italian student.  Four years later their daughter was born. Cultural differences eventually led to panic attacks and in 1983, after thirteen years in Italy, Trudi returned to the States with her daughter.  However, she continued to struggle with health issues and depression, making it hard to hold a job and settle in one place for long.

Years later, in 2016, Trudi moved to Bend, Oregon determined to find home and community. She joined a writing group and began attending open mic nights, where she shared some of her poetry.

Her first experience with Spoken Word was inspired by Jason Graham, Central Oregon-based visual artist, performer, educator, speaker and hip-hop producer. Graham, also known as MOsley WOtta, was hosting a poetry slam at COCC, featuring spoken word artist Roxy Jane Allen. After the main presentation, a small group gathered and began sharing poetry. Trudi, who until then had only read her poems in several small groups, mustered the courage to recite an original piece called Walls (link to poem).

“There were three or four people who got up and performed their spoken word pieces.  Then there was a lull. I don’t know what made me do it, my heart was beating so fast.  But I raised my hand, got up and performed my piece. My voice was shaking but I got through it,” she said.

Graham’s reaction, along with the others, washed over her in a way she hadn’t expected.

“It made me realize how important it is, when you’re a creative person, to share your voice. I believe that creative people are highly sensitive.  If you don’t have anyone to share that with, it’s really difficult, especially if family and others who are close to you don’t relate,” she said.

Just as Trudi was getting more comfortable and finding her place among Bend’s local poets, writers and musicians, COVID-19 brought things to a halt. Like many of us, Trudi felt alone and isolated. When I asked her how she was coping during the pandemic, she said “I feel like I am on an ice flow, drifting further and further away from everyone.”

To help me better understand her experience, she shared this with me in writing…

“Living alone, the isolation and the loss of the activities that kept me grounded was hard. I spent a lot of time online, trying to deal with the sense of alienation that I am sure a lot of people were feeling, as well as the disruption of life as we knew it. I realized just how much the open mics meant to me…how they gave me a sense of self and who I was in the world.

After several months of ever-increasing anxiety regarding the state of our county and the world, I began going through my files of photography with the intention of putting the many photographs in some kind of order. This led to creating several small picture books, incorporating photos and storytelling, and made me feel like I still had something to contribute, something worthwhile to say.

At some point, however, I knew I needed help. Due to increasing anxiety and a sense of alienation. I began working with a therapist from St. Charles Behavioral Health, who used EMDR (Eye Movement Desensitization and Reprocessing). After several months of weekly visits, I began noticing that I felt grounded for the very first time in my life. It has been a process and it takes time. Some days are better than others. I still deal with highs and lows. But the fact is that I am more in my body than I have ever been.”

Finding strength in helping others

Whenever I’m lucky enough to spend time with Trudi, I find that her listening skills are just as good as her story-telling skills. No matter what’s on her plate, she always has space for empathy and compassion for others. That’s why I wasn’t surprised when she shared that she’s looking for ways to help others share their creativity. In fact, the night before we met up, Trudi spent some quality Zoom time with the 13-year-old son of a friend.

“He has a passion for dinosaurs and is drawing them constantly. He has also created a new planet,” said Trudi who asked his mom if she might meet with the young artist periodically and give him a chance to share his drawings and talk about something he was extremely excited about.

At their first meeting, Trudi asked him questions about how he came up with the idea for the planet, the technical challenges he has faced and how he resolved them.

“It felt good to be in a place where I was able to listen and make someone feel good about themselves through the sharing of something that meant a great deal to them. I know how important it is for me and what a difference it made when I shared some of my own projects during the pandemic and got some feedback,” she said.

For those of us like Trudi, who have struggled with self-esteem and feelings of failure, Trudi believes there’s hope.

“As someone who has struggled for years with depression and anxiety, I think it is extremely important for creative people to find something they are really good at and then share it with others, so that you are seen for who you truly are and not just for the things you are struggling with.”

“Creativity is a gift, not only for the receiver but also for the giver,” she said.