This morning I snapped at a stranger and I’m feeling really bad about it. I generally smile and wave at people when I’m out and about. That’s who I am…or at least who I think I am. I feel like some angry person took over my brain momentarily. It was weird because I did a yoga video in a quiet sunny spot in my living room this morning and I was feeling rather zen. So what the heck happened? I’ve been feeling mostly calm and happy lately and it surprised me that I could be triggered so easily and quickly… 0 to 10 before I had time to process it.

Here’s what went down… 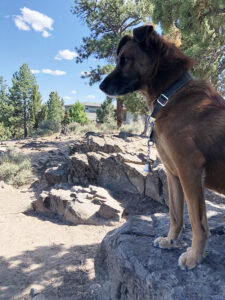 I was walking my dog Rye on the rocks near my house like I do almost every morning. I rarely walk him off leash because he tends to bolt. He’s generally shy with people but friendly with other dogs so I never worry about him being aggressive. I just worry about him taking off and getting hit by a car. This morning, I decided to take a chance because I was feeling sorry for him. You see just the day before, Rye was attacked and bitten by a big dog at the off-leash dog park. This morning, when I touched his neck to put on his leash, he whimpered so I decided to walk him unleashed. As we were walking, he got too far ahead of me and approached a woman and her small dog who was leashed. As usual, there were some friendly sniffs and wagging tails, but I recognize that the dog’s owner didn’t know what to expect from Rye. When I caught up, the woman was polite but concerned.

“You know there’s a leash law,” she said.

“I know, I live here,” I said somewhat dismissively.

That’s when I snapped.

“Well my dog was recently attacked and $375 later…” she said.

Then I caught myself and apologized, but I still offered no excuse for my unleashed dog and I didn’t even make an effort to put his leash on.

You would think that Rye being attacked yesterday would have made me more sensitive to her concerns instead of defensive, but it took a split second too long for that sensitivity to kick in.

I didn’t like myself this morning. I wish I had caught myself before I got snarky, but I didn’t. I want to blame my dysfunctional, explosive childhood, but that’s not fair and it’s not an excuse. After owning my reaction, I’m trying to focus on self-forgiveness.

Self-forgiveness is an intentional decision to let go of shame and negative feelings about ourselves. It’s certainly not an excuse for our actions, but it helps us get rid of destructive feelings so we can learn and grow from our experiences and hopefully change the way we approach things in the future.

So today, I’m going to mind my mind with a little grace and self-forgiveness and if I see that woman again (hopefully tomorrow), I’ll definitely apologize. And Rye will be on a leash.

Here’s an interesting article about self-forgiveness from a cool online resource called verywellmind.