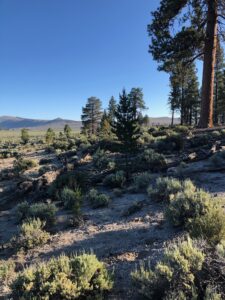 Sometimes, you just gotta get away.

Away from the news.

Away from social media.

That’s what we did on July 4th. We packed up the truck and headed out to BLM (Bureau of Land Management) land. It was just for one night, but it was peaceful, beautiful and just all-around good. The cows didn’t seem unhappy to see us, but they were certainly curious…and a little concerned. Three of our closest friends met us there as well. We sat six-feet apart. We talked and laughed, marveling at the beautiful Central Oregon surroundings and open space that is our backyard.

It took us about an hour to get out to a spot where we couldn’t see or hear fireworks. This was especially important because our dog Rye, a rescue from Prineville Humane Society, suffers from extreme anxiety. Like me, he had a traumatic childhood down in Southern California. After 5 years with our family, he adores us but is still terrified by most other people. So you can imagine the effect fireworks have on his mental and physical health. In past years, fireworks have resulted in a series of “great escapes” of different kind. He has chewed through a metal chain, jumped off of our 2nd story deck, and taken off in a panic to spend the night in Shevlin Park. Luckily he was spotted the next morning by some runners who had seen our desperate Facebook posts. Mostly though, he stands trembling in our shower when fireworks are in play. So that’s why we planned our great escape this July 4th. It’s hard to mind your own mind when you’re watching a loved one struggle.

Out on public land, we passed the afternoon walking and wandering. Later, we sat in our camping chairs munching on chips and sipping cold drinks from the ice chest. Instead of looking at our phones, we looked through binoculars at bluebirds flitting about and landing gracefully on twisted juniper snags. We talked about what we brought for dinner instead of talking about the pandemic. All the while, Rye happily dug holes around our makeshift campsite, kicking dirt on us as he worked and then stretching out in his warm dirt cradles, looking as if he didn’t have a worry in the world. We don’t get to see him this relaxed very often.

At one point, our friend asked if we had brought a “skittle” for cooking. “Yep,” I said without missing a beat or even noticing anything unusual about his question. The others exchanged puzzled glances. When we realized he meant to say “skillet”, we burst out laughing. I, of course, couldn’t stop giggling. 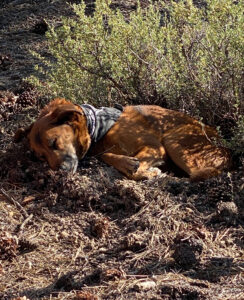 As the sun faded and the air grew cooler, Rye moved from hole to hole, curling up in a perfect little ball with his nose under his tail. Not a cherry bomb to be heard and the only burst of light was the stars and almost full moon in the immense sky.

Unfortunately for my husband, I was still giggling about the skittle thing in my sleeping bag.

“Did we bring a skittle for cooking?” I snorted. “Aye…joke’s over,” he said teasingly. I guess I just needed a laugh. It felt so good, I didn’t want it to stop. Maybe it wasn’t even THAT funny to begin with, but it was good medicine.

Who am I kidding? It was pretty damn funny.

So our great escape was not expensive and it didn’t take long to get there. It was beautifully relaxing and the perfect way to mind our minds during difficult times.

These one-night stands with nature seem to be just the ticket for our mental health right now.

So…what will your great escape look like this summer? Do tell!