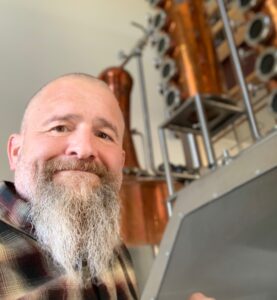 The first time I met Rick Molitor, he was wearing a suit and tie. Clean-shaven, kind and enthusiastic, he was superintendent for Jefferson County School District 509-J.

As a long-time educator and father of two, he is passionate about community and providing all kids and young adults with access to a quality education. He also acknowledged the responsibility and stress that comes with a career in education.

“Every decision you make has an impact on someone’s life and you have to take that responsibility very serious. I had to be mindful about not making issues personal when I didn’t create them, and also owning up to and dealing with things I believed I could have done differently or better,” said Molitor.

To manage the stress of his demanding role, along with the added weight of earning a Doctorate of Education degree during his tenure with the district, Molitor carved out “self-time” for running and riding his motorcycle.

“When you put the helmet on and you’re on a bike and going somewhere, you have this time away from technology that allows you to detach from the world which is really critical. It’s the same with running,” he said.

That might explain why Molitor spent early mornings running with his daughter, Maddie, who at the time was an accomplished cross-country runner at Madras High School. He also trained and participated in two 50-mile Northface Endurance Challenges and twice attempted the Canadian Death Race (78 miles). He calls running and riding 1,200 miles to the annual Sturgis Motorcycle Rally in South Dakota “rejuvenation time”.

“I think it is really important to reflect back on your actions. Not as a burden, but a way to seek improvement. Everyone makes mistakes and decisions they wish they had handled differently. You can’t change the past. However, you can always learn and improve for the present and future,” he said.

Molitor remembers a happy childhood and credits his family’s cheerful disposition to their Irish roots. While he is very close with his 79-year-old dad, he said his family didn’t talk about mental health when he was growing up.

“You just didn’t talk about things like anxiety and depression then. I think many of us don’t talk about it unless we’re faced with something or a friend reaches out,” he said.

For the Molitor family, it surfaced when Maddie was in high school. With family support and very impactful professional counseling sessions, he said she went from surviving to thriving.

“Her therapist talked with her about the stigma around mental health and how our minds are just like any other organ in our bodies. He told her ‘if something hurts and it won’t go away, you go to the doctor,’ and that really changed her perspective,” Molitor explained and added that it also helped him recognize the value of professional therapy.

Discovering the craft of distilling

In 2013, Molitor added the craft of distilling spirits to his list of mindful hobbies.

“I’ve always admired people who can bring something into the world, build it from the ground up,” said Molitor. “Whether it’s farmers or ranchers or musicians or anyone who is practicing a craft that brings people joy, it has always inspired me.”

As his passion for distilling grew and he was finishing his 9th year as JCSD superintendent, he saw an opportunity to hand the district over to new leadership.

In 2017, following a 27-year career in education, Molitor retired from his position with the school district and set out on a very different path as a managing partner and head distiller of a small-batch, artisan distillery based in Madras.

“The timing felt right for both me and the district. It gave the district an opportunity for a new leadership perspective and allowed me to explore something different that I hadn’t done before.”

Now when our paths cross, I see Rick sporting a flannel shirt, motorcycle boots and a wide smile under a long ZZ Top-style beard. He loves his work and his Jefferson County community and he keeps his father’s favorite quote above his desk at the distillery.

“Remember not only to say the right thing in the right place but far more difficult still, to leave unsaid the wrong thing at the tempting moment.”