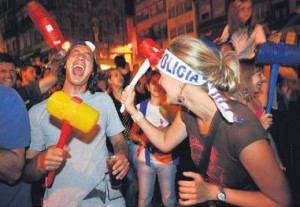 Last year, our daughter Presley was traveling and working on farms in France.  Before returning to the states, she took a short visit to Portugal. When she arrived in the town of Porto, she was immediately bopped on the head by a stranger with a soft plastic “squeaky” hammer. To her surprise, the playful head bopping continued repeatedly by others as she walked Porto’s narrow streets and plazas. The town was festive with colorful decorations, parades, dancers, makeshift grill stations and bars selling Portuguese sardines, beer, and sangria.  She eventually figured out that she had stumbled upon the annual Sardine Festival, a huge holiday/block party that originated as a pagen feast to honor the sun god and celebrate abundant crops and fertility. Later it became a Catholic celebration to honor the feast of St. Anthony.

As she described her experience to us, I was completely fascinated by the playfulness of this cultural event. Yes, we too have celebrations and holidays in the United States, but I kept trying to think of something similar in which we engage each other in such a silly way (Oh yes, and the Sardine Festival includes sardine hats). At a time in our country when tensions seem especially high and we’re feeling more polarized than ever, it made me want to bring the Sardine Festival to Central Oregon. Maybe if we dressed up in costumes and bopped each other on the head while eating, drinking and dancing, we might feel more accepting of our differences? Or maybe just “lighten up” a bit?

Ok, I know that’s not the answer to the woes of the world, but it’s kind of fun to think about. It got me thinking about playfulness and how we might use it more intentionally to mind our minds. The other day, I was talking with a group of friends and one mentioned how she loves to play loud music and dance around the house when no one else is home. I’ve done it. It’s glorious. There’s a song that totally gets me dancing…shamelessly. Maybe you can try it. Coincidentally it’s Portugal. The Man’s “Feel it Still”. If you use wheels for mobility, check out this short video about The Rollettes. If you’re not a dancer for any reason, try just listening to music that gets your heart racing.

Another friend who was visiting several years ago talked me into skipping while strolling at Drake Park. She swore it would bring joy and it actually physically did. There’s no way to avoid smiling when you’re skipping. I also never pass up a chance to jump on a playground swing. Just this week, I had to take my dad to the doctor and then for a chest X-ray… and then to the lab… AND THEN to Rite Aid. He was feeling miserable with a chest cold which, for him, is especially challenging because he’s 81 and lives with Cardio Pulmonary Disease (COPD). As we were getting in and out of the car, going from medical office to medical office, he was getting very tired and having trouble walking. At our last stop, I grabbed a wheelchair. I started wheeling him around rather fast while making childlike sounds of a car engine and squealing brakes. He kept chuckling and when I got him in the car, he said “that’s the most fun I’ve had in a long time”. When I finally got him back to his apartment, he said it two more times. “That was the highlight of my day!” he said. The next day on the phone, he said “I can’t stop thinking about that wheelchair ride”. Something so simple and silly, yet we both needed that break from the seriousness of the day.

So how do you make time to play? Here’s an article to consider from the nonprofit mental health and wellness website HelpGuide titled The Benefits of Play for Adults. Also check out this article from Mayo Clinic: Stress relief from laughter? It’s no joke.

We’d love to hear from you if you have ideas about how to add a little playfulness to our lives.